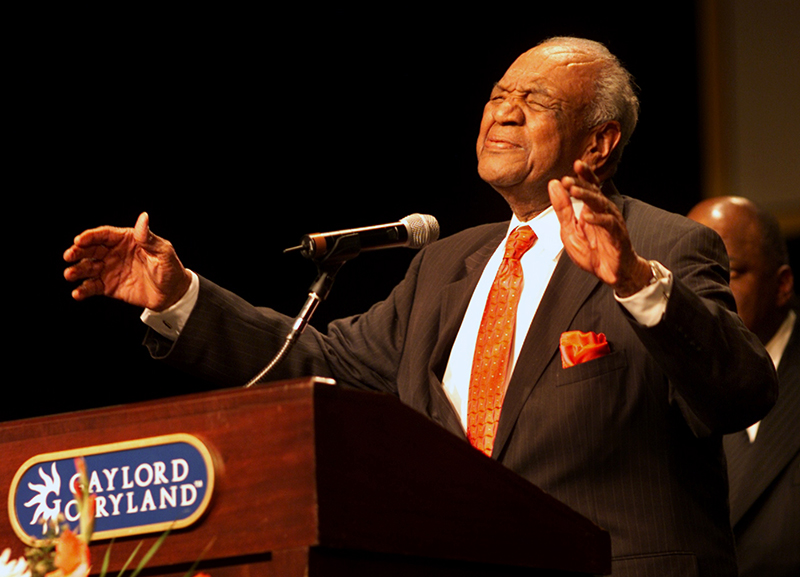 The Rev. Gardner C. Taylor prays during his sermon at a historic meeting of four black Baptist denominations at the Opryland Hotel in Nashville, Tenn., in 2005. Religion News Service file photo by Michael Clancy.

It could not have happened on a more appropriate day.

Gardner C. Taylor, a giant of the American pulpit who had spent most of his life proclaiming Christ, passed away at 89.

Taylor served from 1948 to 1990 as Senior Pastor of Brooklyn’s Concord Baptist Church of Christ. He served twice as National Radio Preacher for NBC, delivered the 100th Lyman Beecher Lectures on Preaching at Yale University, and lectured at many colleges and seminaries. He was influential in establishing the Progressive National Baptist Convention and served as President of that significant body.

In 1979 Time magazine called him the “dean of the nation’s Black preachers,” Baylor University included him in its 1996 list of the 12 most effective preachers in the English-speaking world.

In 1993 I had my first opportunity to meet Dr. Taylor, conducting an interview that would appear in the January-February 1994 issue of Preaching magazine. He became a Contributing Editor of that publication (which I serve as Executive Editor) and spoke for us at the National Conference on Preaching and other events.

Over the years, I was blessed to have the opportunity to visit with him from time to time, and in 2010 was honored to be invited to write a chapter for Our Sufficiency Is of God. This book consisted of essays written in honor of Dr. Taylor, edited by Timothy George, James Earl Massey, and Robert Smith, Jr. My last personal visit with him was at the reception marking the release of the book, held at Duke Divinity School to accommodate his inability to travel (he was living in Raleigh, North Carolina in retirement). Even then, with his health on the decline, he was gracious, engaging, and exuberant in his love for preachers and preaching.

In 2010, Preaching magazine proposed the 25 most influential preachers of the past 25 years, and Taylor ranked number four on that list. In 1999 Preaching included him in its list of the 20 greatest preachers of the 20th century. In that 2010 article, I wrote: “A profound influence on the African-American pulpit, Gardner Taylor is a model of eloquence and passion in preaching.”

He was the final pulpiteer of his generation; we called him “the last pulpit prince” in a 2014 profile in Preaching. He not only faithfully preached the Word to his congregation for many years, but he profoundly influenced more than one generation of preachers who stood on his broad shoulders.

Even as he lays down his mantle and moves into the other side of eternity, may he inspire new generations of preachers to preach the Word boldly and faithfully.